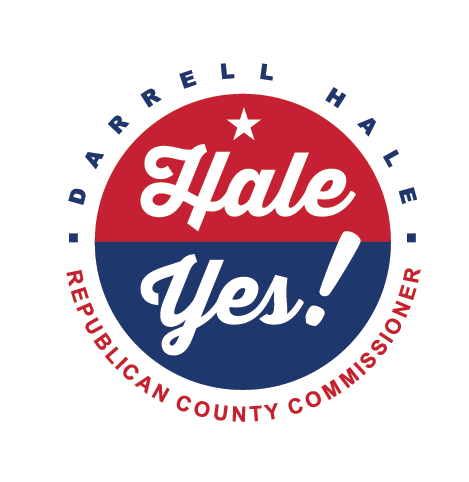 I am supportive of term limits for elected government officials. While we don’t determine this at the Commissioner’s Court I promise to self limit myself to no more than two full terms as your commissioner. We need variety of ideas and representation by citizens of all walks of life and not just politicians.

Our county functions well, but as a tech exec for 14 years there are efficiencies I know we could add. There are exciting ways to utilize technology to create savings and boost productivity. I have worked on tight budgets and compressed timelines to deliver exceptional private results. County services need some of those same efficiencies, and citizens should expect easy processes, not bureaucratic ones. As an award-winning small business owner I understand the value of a dollar—your tax dollar. I will be a good steward of your money. I am going to push for simple, easy, and affordable ways to make interacting with government more efficient and effective.

Eminent domain should be used only in the rarest of cases. It is something that usurps the ability to pursue life, liberty and the pursuit of happiness. It takes something of sentimental value, and gives someone a few dollars in exchange for a family farm, or a home where children took their first steps, where people have lived their entire adult lives. The brute coercion involved is unacceptable unless there is a true and absolute need or no other way around it. A rare case is someone keeping property in the middle of a future reservoir or causing a pattern for a major highway is problematic and impractical. However, every effort and option should be exhausted and then reviewed again before eminent domain is used, and it should never be used solely to boost the tax base by taking residential homes and selling those to commercial interests. This will come up again and again in the future years as road infrastructure is expanded throughout the county and we all need to be involved in balancing this so that the individual is not crushed under the state's power.

My greatest accomplishment is my family, a wonderful wife of 19 years and four great girls. Our sacrament of marriage is strong and we continuously work together to set a great example for our children. We go to church together to Our Lady of Angels and raise our children to be moral, righteous, and to fight injustice. As a family we want to build a society and system of laws respecting the sanctity of life both for the living and the unborn both out of a love of God and a love of liberty. Abortion is the ultimate deprivation of liberty and such a tragic, preventable, act.

Government's power should be directed at a few key issues, and absent from other aspects of our lives. The county builds and maintains county roads and bridges alongside TXDOT and the Council of Governments. The county maintains courts, elections, and the sheriff’s office and jail. A commissioner is responsible for setting the budgets and tax rates in those departments and it isn’t the government’s role to solve every problem or meet every need. Many are tempted by the power of government to do just one more thing, to try and solve one more social problem, but we all need the discipline to resist and encourage charities, churches, and private interests to do the things government should not. Limited government means limited taxes. Big government means coercion, bloat and waste, and punishing taxes. I am for limited government.

Character is what you do when no one is looking, and citizens ought to expect good character in their governments. Transparency in all our governmental functions, contracts and operations is critical. In the military a “ Spotlight Ranger” is someone who performed honorably and admirably when the light was shining on them. The test, though, is what a person does when the light isn’t shining on them. You should be able to look into all operations of government and be assured things make sense and are what you would expect. Citizens can make formal demands for information through the Public Information Act, which is riddled with exceptions to keep government files secret. My goal is going to be to make all substantive parts of government open, viewable, understandable, and something residents can be proud to witness.

Collin County Government generally runs well. We have made a proud conservative county and I want to keep it that way. The departments run well and taxes have been kept generally low relative to the massive increases seen in city and school spending. A Darrell Hale vote is to continue the great conservative work by the commissioner's court.

“ The right to keep and bear arms shall not be infringed,” and any laws contrary are unconstitutional. This protected right is the bedrock against tyranny and to provide safety for the individual to protect families. As a veteran, this right is non-negotiable in any way, even as small compromises. I intend to find opportunities to expand gun rights and expand gun ownership for personal and protective use when in office--at the end of 2019, I helped co-author a resolution reaffirming our oath and duty to the Constitution that passed 5-0 in the Commissioners Court.

As a former business owner, I know it's tempting to use cheap labor to cut costs instead of paying legal residents what they deserve. I have seen competitors turn a blind eye to the law and use labor at less than minimum wage so they could undercut bids. People should follow the law when they come to America, and when they are here, and we should all work together to make a workable immigration system that keeps American wages high, our social services solvent, and balances out our state and nation's needs. Right now the system is a mess, and government needs to enforce our immigration laws first. I believe in E-Verify and think it should apply to work for the county, and I also think county work should go first to proven county residents.

Thank you! Your submission has been received!
Oops! Something went wrong while submitting the form

We Can't Do It Without You